The Young Turks were a secularist national reform party. They later became officially known as the Committee of Union and Progress. In 1878, Sultan Abdul Hamid II suspended the Turkish Constitution. The Young Turks supported the constitution and wanted a democratic solution to the problems within the Ottoman Empire, which included economic and tax reforms. In addition to the suspended constitution, the Young Turks Revolution took issue with the increased centralized government, the loss of territory, and the assassination or exile that occurred for any that opposed the sultan. 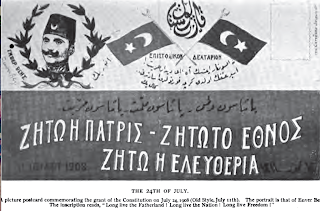 The revolution was sped up by an announcement by Austria of a railroad being built that would bring the western portion of the Balkan peninsula under Austrian influence. This announcement hastened the rebellion because it showed the power that the Sultan had to give up territory and the power that outside influences had.
Beginning on July 6, 1908, the Young Turks led a rebellion against the Sultan. This rebellion was later deemed the Young Turks Revolution. The revolution was strongly influenced by the French Revolution and aimed at restoring the Empire's constitution. It is interesting to note that while the revolution mirrored some of the revolutions and written constitutions in Europe, like the French Revolution, it also aimed at dismissing European influences and interference. Foreigners thought little of the rebellion at first, but had to take notice as the revolution grew rapidly. 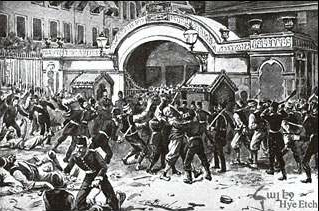 Some participants wanted to abolish the position of the sultan while most simply wanted to impose constitutional limitations on the sultan's power. A number of Turks had been exiled from the Ottoman Empire, many finding homes in Paris and Geneva. It was these individuals, as well as Western-Oriented secularists, reform-minded pluralists, Turkish nationalists, and anyone that blamed the Sultan for the state of the Ottoman Empire, that joined the Young Turks Revolution.
The Sultan tried multiple times to end the revolution by sending out military troops; however, soldiers were unpaid and officers could not keep order or hide their dissatisfaction with the Sultan. Because of this, the revolution actually gained popularity among the troops and the Sultan's attempts to end the rebellion failed further. The Sultan then surrendered by granting a constitution and restoring parliament. The rebellion lasted from 1908 until 1909. After the Revolution, the Young Turks, ruled the Ottoman Empire from 1908 until the end of World War I in 1918. As a part of their rule, the Young Turks also established the Second Constitutional Era. 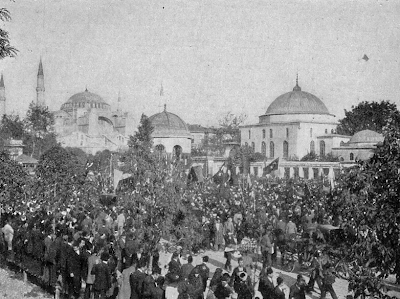 Application to Against The Day:


For this topic, Pynchon discusses the politics surrounding the geography, religion and nationalism of southeastern Europe: this discussion must include Turkey and the Young Turks Revolution. This week's reading of Against the Day has a few references to the Young Turk Revolution.
One of those is when Cyprian and Danilo arrive in Salonica. They "find the city still reverberating like a struck gong" because of the conflict between the sultan and the Young Turks (842). This section of text discusses the activities of the Young Turkey Party and the Committee of Union and Progress, as it became later known. Another is when Ratty is discussing Turkey and Bosnia. I found that a main topic for this section is the geopolitics surrounding Turkey and Austria. Ratty mentions the removal of Bosnia from Turkey to place it under “Austrian 'protection'” (809). The loss of territory was one of the big components that led to the Young Turks Revolution. The nationalist movements were trying to find or create identities from below against authoritarian forces. This is seen prevalently in the history of the Ottoman Empire, and really, in the anarchism found throughout the novel as a whole. Many characters are seen as “below” but are working to find their way above and to create an identity. The “below” idea fits extremely well into the miners in Colorado whom are literally underground without identities.
Within last week's section of the reading, the Young Turk Revolution is prevalent mostly in references to the Russo-Turkish War of 1877. Russians aimed to access the Mediterranean Sea and liberate Orthodox Christians from the Islamic-ruled Ottoman Empire. The Russo-Turkish War was one of the sparks for the revolution. The Russo-Turkish War comes up again in later sections mentioning the aftermath of the Turkish Revolution and the changes it brought to the Ottoman Empire.
In earlier sections, the “odalisque of the snows” (141) is mentioned. An odalisque was a virgin slave within the harem of the Turkish sultan. In this section, the extravagance of the Sultan is shown. Both directly and indirectly, Pynchon uses the historical events surrounding the Young Turks to enrich his text.